Death of a Supergiant 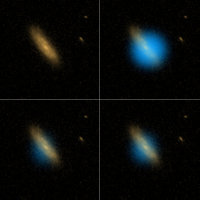 Sequence of images shows supernova start to finish. The top left image shows the galaxy before the supernova. At top right, the bright UV flash called the shock breakout indicates a red supergiant has collapsed. At bottom left, moments later, the flash is mostly gone. As the debris expands, it heats up again and becomes brighter (bottom right). The supernova became 10 times the size of the original over the following few days, thus becoming visible to supernova hunters. By all outward appearances, the red supergiant appeared normal. But below the surface, hidden from probing eyes, its core had already collapsed into an ultra-dense neutron star, sending a shock wave racing outward from the star's center at around 50 million kilometers per hour.

The shock wave superheated the plasma in its path to almost a million degrees Kelvin, causing the star to emit high-energy ultraviolet (UV) radiation. About six hours later, the shock wave reached the star's surface, causing it to explode in a Type IIP supernova named SNLS-04D2dc.

“This UV light has traveled through the star at the moment of its death but before it was blown apart,” explains Kevin Schawinski, the University of Oxford astrophysicist who led the observation. “So this light encodes some information about the state of the star the moment it died.”

And that's exactly why astronomers are so excited. Observing the beautiful nebula left behind by a supernova doesn't reveal much about what the star was like before it exploded; most of the evidence has been obliterated. Information encoded in these UV "pre-flashes” could offer scientists an unprecedented window into the innards of stars on the verge of exploding.

In this case, Schawinski and his colleagues calculated that just before its death, the star was 500 to 1000 times larger in diameter than our sun, confirming that the star was in fact a red supergiant. “We've been able to tell you the size of a star that died in a galaxy several billion light-years away,” Schawinski marvels.

“GALEX has played a very important role in actually seeing this for a few reasons,” Schawinski says. First, GALEX is a space telescope, so it can see far-UV light that's blocked by Earth's atmosphere.

Also, GALEX is designed to take a broad view of the sky. Its relatively small 20-inch primary mirror gives it a wide, 1.2-degree field of view, making it more likely to catch the UV flash preceding a supernova.

With these advantages, GALEX is uniquely equipped to catch a supernova before it explodes. “Just when we like to see it,” Schawinski says.

For more information, visit www.galex.caltech.edu, “Ultraviolet Gives View Inside Real 'Death Star'.” Kids can check out how to make a mobile of glittering galaxies at spaceplace.nasa.gov/en/kids/galex_make1.shtml .

Death of a Supergiant | 0 comments | Create New Account
The following comments are owned by whomever posted them. This site is not responsible for what they say.

Become a card-carrying member of AOAS. Paying dues gives you several advantages over other registered users, including a subscription to the club newsletter, an AOAS.ORG e-mail address, use of club materials, including books and telescopes, and access to the Coleman Observatory facilities. On top of all that, you also qualify for a 20% discount on all books at any Books-A-Million location.

Created this page in 0.08 seconds

Copyright © 2021 AOAS.ORG
All trademarks and copyrights on this page are owned by their respective owners.