A Google for Satellites: Sensor Web 2.0 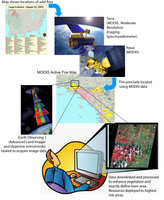 “Google for satellites” type of web portal will allow users to request real-time data from Earth observing satellites. If you could see every satellite passing overhead each day, it would look like a chaotic meteor shower in slow motion.

Hundreds of satellites now swarm over the Earth in a spherical shell of high technology. Many of these satellites gaze at the planet's surface, gathering torrents of scientific data using a dizzying array of advanced sensors — an extraordinary record of our dynamic planet.

To help people tap into this resource, NASA researchers such as Daniel Mandl are developing a “Google for satellites,” a web portal that would make requesting data from Earth-observing satellites almost as easy as typing a search into Google.

“You just click on it and it takes care of all the details for you across many sensors,” Mandl explains.

Currently, most satellites are each controlled separately from the others, each one dauntingly complex to use. But starting with NASA's Earth Observing-1 (EO-1) satellite, part of the agency's New Millennium Program, Mandl and his team are building a prototype that stitches these satellites together into a seamless, easy-to-use network called “Sensor Web 2.0.”

The vision is to simply enter a location anywhere on Earth into the website's search field along with the desired information types — wildfire maps, vegetation types, floodwater salinity, oil spill extent — and software written by the team goes to work.

“Not only will it find the best sensor, but with proper access rights, you could actually trigger a satellite to take an image in the area of interest,” Mandl says. Within hours, the software will send messages to satellites instructing them to gather the needed data, and then download and crunch that raw data to produce easy-to-read maps.

For example, during the recent crisis in Myanmar (Burma) caused by Cyclone Nargis, an experimental gathering of data was triggered through Sensor Web 2.0 using a variety of NASA satellites including EO-1. “One thing we might wish to map is the salinity of flood waters in order to help rescue workers plan their relief efforts,” Mandl says. If the floodwater in an area was salty, aid workers would need to bring in bottled water, but if flood water was fresh, water purifiers would suffice. An early and correct decision could save lives.

Thus far, Mandl and his team have expanded Sensor Web 2.0 beyond EO-1 to include three other satellites and an unmanned aircraft. He hopes to double the number of satellites in the network every 18 months, eventually weaving the jumble of satellites circling overhead into a web of sensors with unprecedented power to observe and understand our ever-changing planet.

To learn more about the EO-1 sensor web initiatives, go to http://eo1.gsfc.nasa.gov/new/extended/sensorWeb/sensorWeb.html. Kids (and grown-ups) can get an idea of the resolution of EO-1's Hyperion Imager and how it can distinguish among species of trees—from space at http://spaceplace.nasa.gov/en/kids/eo1_1.shtml .